Well, it's September 20th, and baby Chapman is already one month old! Time has flown already, I dread how fast it will go from this point. I am thoroughly enjoying my time with him. It's hard to believe that I only have three more weeks to spend with him, but I'm trying not to think about what it will be like to go back to work.
As far as running, the doctor cleared me last Friday to get out and run. So, what did I do on Saturday? I RAN! My friend Sarah and I took off for a three miler on Saturday morning. She hadn't run in a few weeks, so we were both kind of starting from scratch. We ran three miles and did minimal walking. We made it a mile and a half without walking at all, which I feel is good, considering I haven't run in nine weeks. I've been walking since I stopped running, but it just isn't the same. So, to be able to do three miles the first time out felt pretty good.
On Sunday, Chapman and I participated in the Constitution 5K as our first race. I ran the race and my parents walked and pushed Chapman in the stroller. I finished in 34:49 (by my watch) and was able to be there to cross the finish line with my little man! While it's definitely my slowest 5K in years, it just felt good to be out there participating. Here is a picture of Chapman and I after the race. They even gave him his own bib that we hung from the stroller. 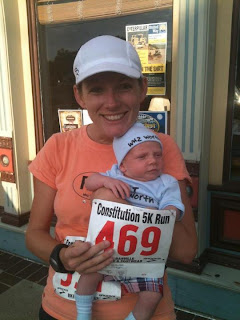 We had a lot of fun and I hope that running is something that Chapman and I can share together for the rest of our lives. As far as MY running, it's feeling okay at this point. I'm a little tender in certain areas, but other than that, I feel great! I went out for a run last night and was able to average about a 10:10 mile, which is pretty good for not running for nine weeks. Hopefully I'll be back to those faster miles soon and adding some mileage! 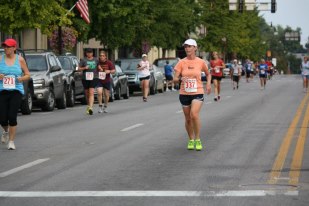 Sheridan Lee
Hi! My name is Sheri and I live in Danville, Kentucky with my wonderful husband, Jeremiah. I am the guidance counselor at Bate Middle School in Danville. I love to spend time with family and friends, work out, ride my bike, and RUN!

If your company would like it's products tested and reviewed on my blog, please email me! My email address is: sheridunlee@bellsouth.net. I would love to review your products! Happy training! :)