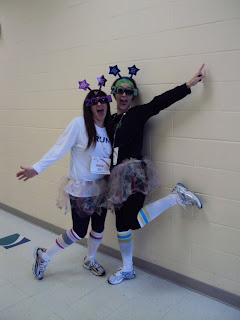 What better way to ring in the New Year than by running? My running buddy, Bobbie, came across a virtual race at the blog Long Legs on the Loose. It was called 12K of Christmas. We had between Christmas and New Year's Day to complete 7.46 miles. We didn't have to do it in one sitting, but we decided to do it that way. Some people took to the treadmill, eliptical, etc. We took to the road. Right now in Danville, Kentucky, it is 58 degrees outside. This means perfect running weather. We started our 7.46 at the McDowell Wellness Center, ran all the way up Main Street, over to Lexington Avenue, a lap around the Bellevue Cemetery and back to the Wellness Center the way we came. It was an absolutely beautiful morning for a run, minus the fact that the wind seemed to be blowing 80 miles an hour! That kind of hindered us a little. But, we had fun and it was worth it! Not to mention, our fabulous costumes! 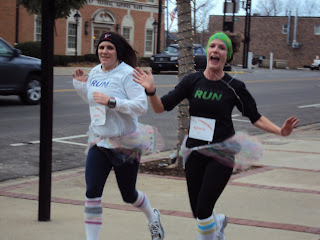 What can I say happened in 2010 that I am extremely thankful for??? Well, my husband and I celebrated our one year anniversary and I have found a great friend in a running buddy that was there for a long time, I just never knew it. We had run into each other at several local races, but didn't start running together until this past June. I thank God everyday for her. Sometimes being able to hit the pavement with Bobbie can be my sanity. Not to mention the fact that our husbands get along GREAT! They get more excited about double dates than we do! :)
Have a very happy new year everyone! 2011 goals to come! There are lots of them!
Posted by Sheridan Lee at 12:26 PM 4 comments: 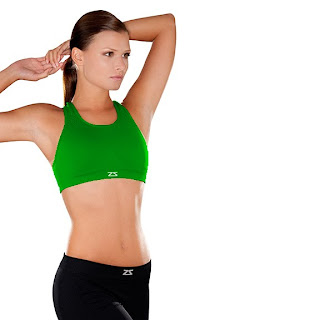 All I can say is...WOW! I contacted the people at Zensah about trying out a product and reviewing it. Honestly, I was hoping for some compression socks, but they offered a sports bra instead. I have to say, I'm glad they wanted to send the bra. It honestly is one of the best sports bras I've ever owned.
Now, I have to be honest. Being that I don't have much to worry about in that area, I haven't always bought the bras with the best support. After wearing this bra, I will never buy a cheap one again. First of all, it's seamless. No seams means no uncomfortable rubbing under the arms or under the girls. NO CHAFING! A definite must when I'm getting ready to begin training for my first full marathon!
Another plus is that the bra is anti-bacterial! I love anything that is anti-bacterial! When I finished my run, I actually took it off and smelled it. It smelled like it had just come out of the wash.
And girls, you will love this! This bra is available in 10 different colors. CLICK HERE to see all of the colors that Zensah offers in this bra. I chose green just because my husband always tells me I look good in green! :) (By the way, that's not me in the picture!)
Thank you Zensah for sending me such a wonderful addition to my running gear! It rocks!
Posted by Sheridan Lee at 9:10 PM No comments: 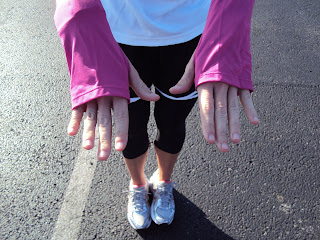 Thumb holes! What can be said about thumb holes that isn't fabulous??? I love thumb holes! And not only does this shirt from Lucy have thumb holes, but it's just the right shirt for cool or cold running. It's not like a normal dri-fit shirt that you get at a race, it's a little bit thicker, so it's good for a cool run or a COLD run, which is what we in Kentucky are experiencing right now! It's also great because it has a reflective stripe down the back of the shirt so that people can see you if you are running at night! This shirt has quickly become one of my favorite pieces to wear while running. I am one to quickly remove my gloves when running, so this shirt keeps my hands warm but doesn't cover my fingers, which is what bothers me about gloves. The shirt also has mesh insets, is moisture wicking, and has an odor blocking finish! How awesome is that?! Thank you so much to Elizabeth over at Lucy Activewear for letting me try out this shirt. I'm glad I don't have to give it back! :) 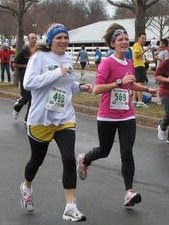 Now, onto your favorite part: the giveaway! Lucy also sent me some socks to try out, which I love also! I love short socks and these are short, but they have a padded sole for comfort and a padded heel tab to reduce blisters and chafing. The back of my shoe never touches my body! Love them!
You could be the lucky winner of two pairs of these socks! Two lucky winners will win 2 pairs of the Lucy Training Socks in the pictures below. 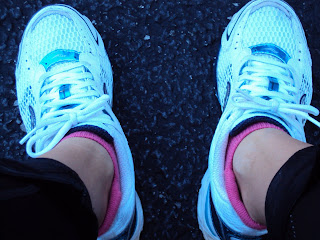 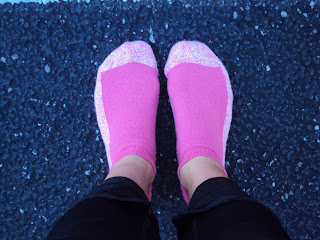 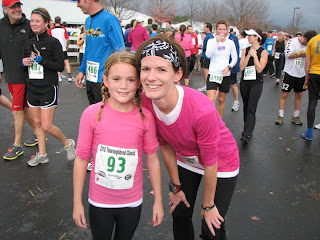 On Thanksgiving Day, my niece (Gracie) and I ran our first 5K together called the Thoroughbred Classic in Lexington, KY. Actually, my training buddy (Bobbie), also ran with us! :) She's so supportive!
Gracie had been begging me for some time to run a race with me, but I told her we had to do so training before. I had to make her understand that you don't just go out and run a 5K...you have to prepare beforehand. She, like me, thought..."3 miles? That's not so bad!" Well, as we all know, 3 miles is further than you think it is when you aren't already a runner.
So, we began some training together. Gracie plays soccer and softball, so running is something she does on a regular basis, just not for long distances and not for endurance. So, we started out with 1.5 miles, then worked up to 2 miles, then onto 2.5 miles. We never actually completed the 3.1 until the day of the race.
And we're off! The race began! At about 3/4 of a mile, Gracie needed to stop because her chest was hurting from this awful, hacking cough she had been fighting. The great thing about Gracie? Yes, she needed to walk. Yes, she walked. But...she picks a spot to walk to and then she starts running again! She's fabulous! She walked again at about the halfway point and only one other time after that, so I was very proud of her! Especially with the cough she was fighting! :) 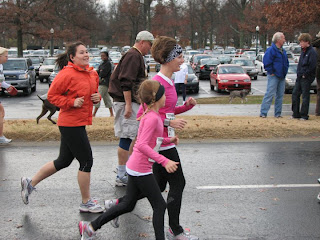 This is a picture of us at about the halfway point of the race. We are still smiling, so it can't be that bad! :) After we came around the back side of the barn on the grounds, Gracie said, "Where do you think Jenny and Michael are?" These are our cousins who were running the race as well. I told her they couldn't be that far in front of us and if we tried, we might could pass them, at least one of them. Well, Gracie is the most competitive 9 year old I know, so this was definitely some motivation. She picked up the pace and caught up with and passed Kelly, a friend of the family. And she also caught up with and passed our cousin Jenny! She was fabulous! 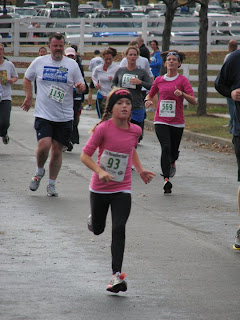 When the finish line was in sight, I let her know. This was when she really picked up the pace. Needless to say, she left Bobbie and I in her dust! Look at the picture! Yep! That's me, trying to keep up! She finished 6th place in her age group with a time of 37:12! That's a pretty awesome time for a 9 year old with tiny legs! Can you tell I'm proud!
Thanks for staying with us Bobbie!
Way to go Gracie!
Posted by Sheridan Lee at 3:57 PM 10 comments:

Sheridan Lee
Hi! My name is Sheri and I live in Danville, Kentucky with my wonderful husband, Jeremiah. I am the guidance counselor at Bate Middle School in Danville. I love to spend time with family and friends, work out, ride my bike, and RUN!

If your company would like it's products tested and reviewed on my blog, please email me! My email address is: sheridunlee@bellsouth.net. I would love to review your products! Happy training! :)